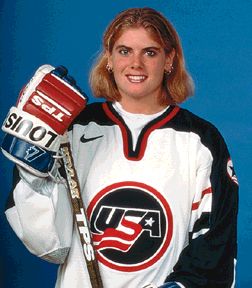 Defense, USA Women's National Team Gold and Silver Medal Olympian Tara Mounsey has appeared on two U.S. Women's National Teams (1996 and 1997), recording three goals and three assists in 10 games ... was named the U.S. Player of the Game following Team USA's 6-0 win against China at the 1997 Women's World Championship ... earned an Outstanding Performance Award for the U.S. at the 1996 IIHF Pacific Women's Hockey Championship ... also appeared on U.S. Women's Select Teams in 1995 and 1996 and was a member of the 1995 U.S. Women's National Junior Team ... Mounsey will be a sophomore at Brown University ... helped lead the Bears to the Eastern College Athletic Conference tournament semifinals ... was named the 1996-97 ECAC Rookie of the Year and was named to the ECAC Division I All-Star Team ... she also garnered the 1996-97 Ivy League Rookie of the Year award and received a first-team All-Ivy nod ... she is studying biology at Brown and hopes to pursue a career as an orthopedic surgeon ... she graduated from Concord High School in 1996 and captained her team to the 1996 New Hampshire (Class L) State Championship ... was named the 1995-96 New Hampshire (Class L) Player of the Year, the only girl to ever win that award ... enjoys mountain biking and reading in her spare time ... has one younger brother, Mike, who participated at the 1996 USA Hockey Select 16 Festival and the 1997 USA Hockey Select 17 Festival ... parents are Mike and Susan Mounsey. Member of the 2002 U.S. Olympic Team in women's ice hockey Member of Team USA's gold medal team at 1998 Olympics 2-time member of Team USA at IIHF Women's World Championships (1997, 1999) Member of the U.S. Women's Select Team that captured the silver medal at the 1996 IIHF Pacific Women's Championship (earned Outstanding Performance Award) Recorded at least one point in five of the six games at the 1998 Olympics.